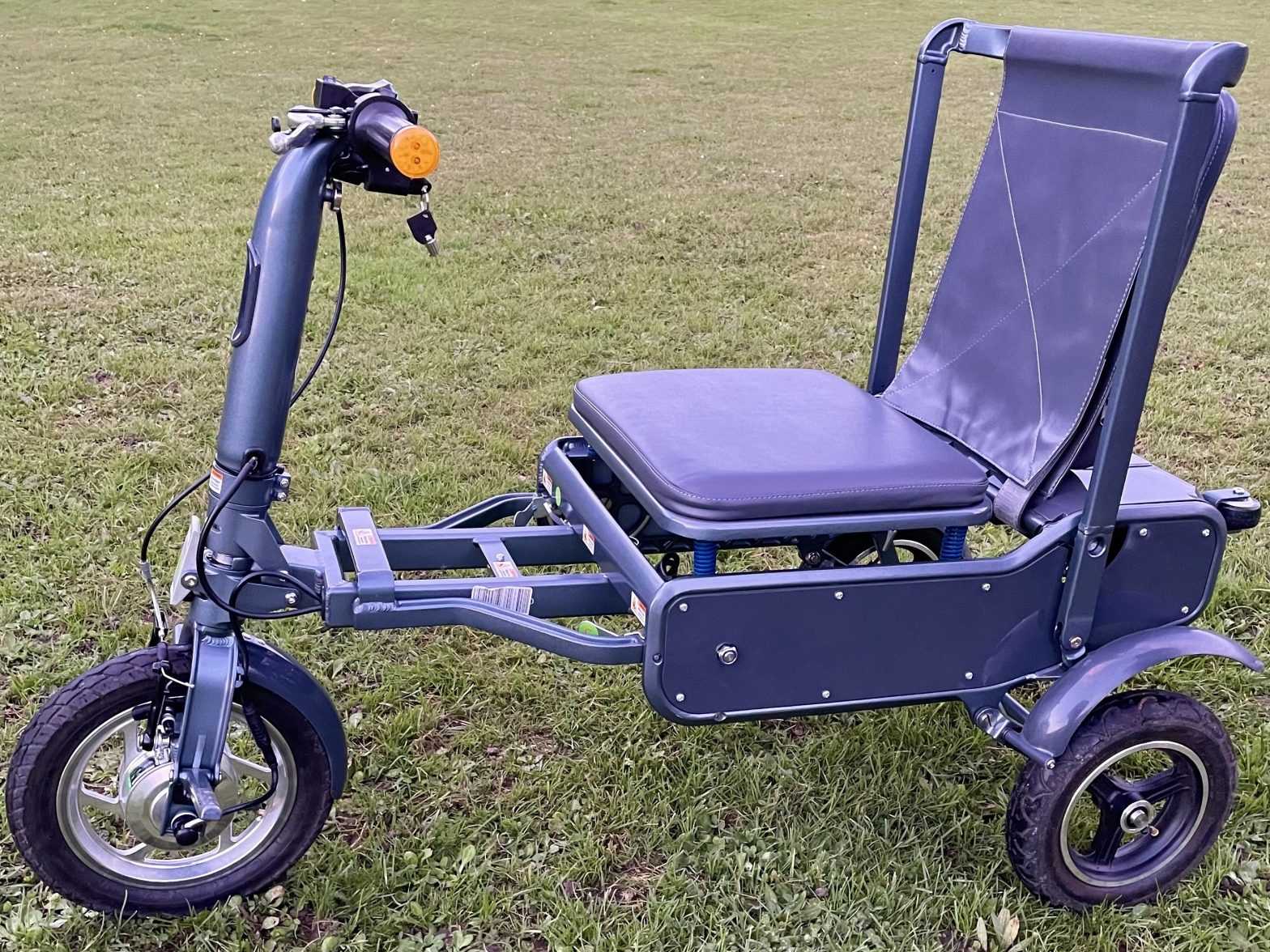 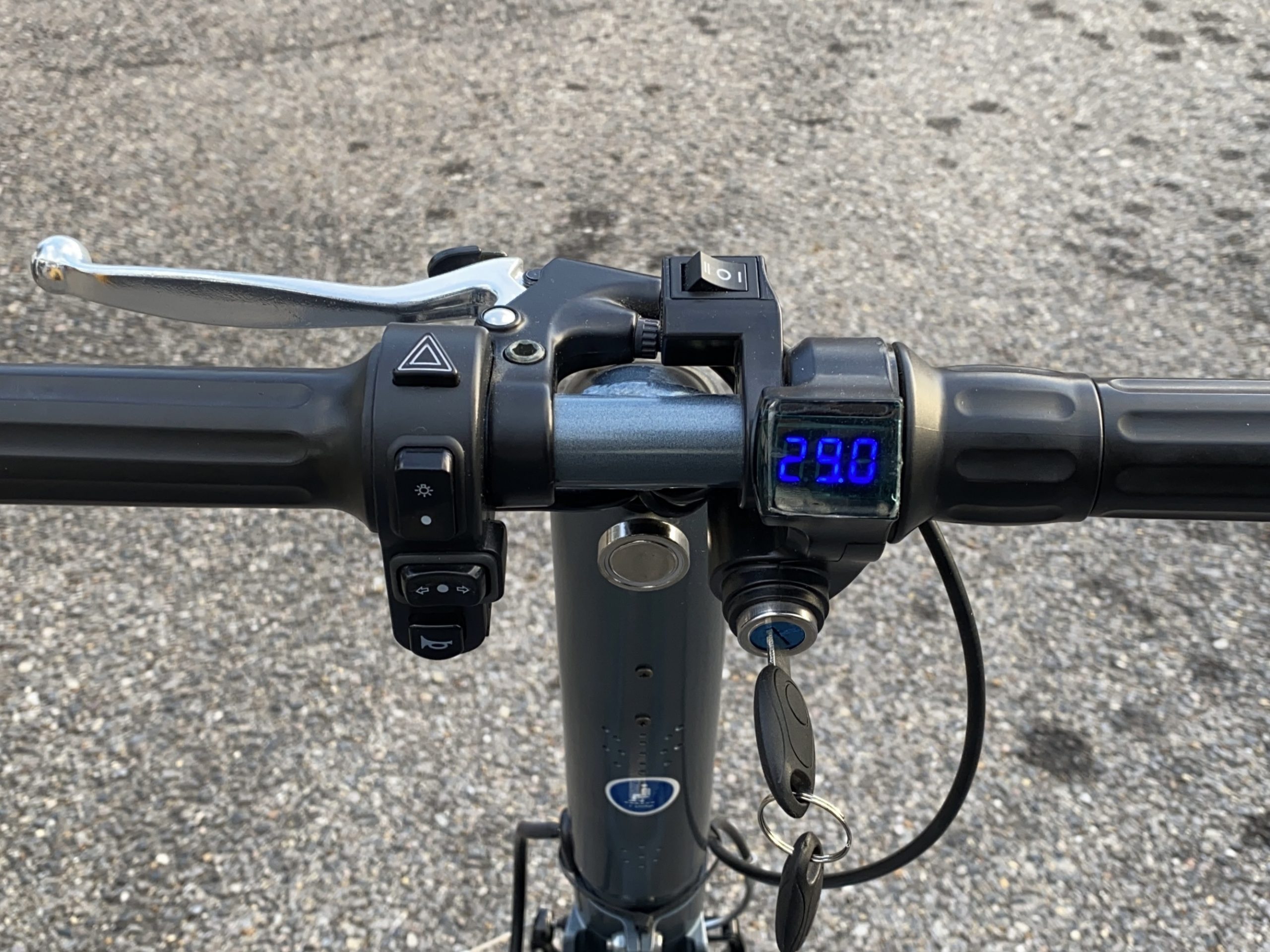 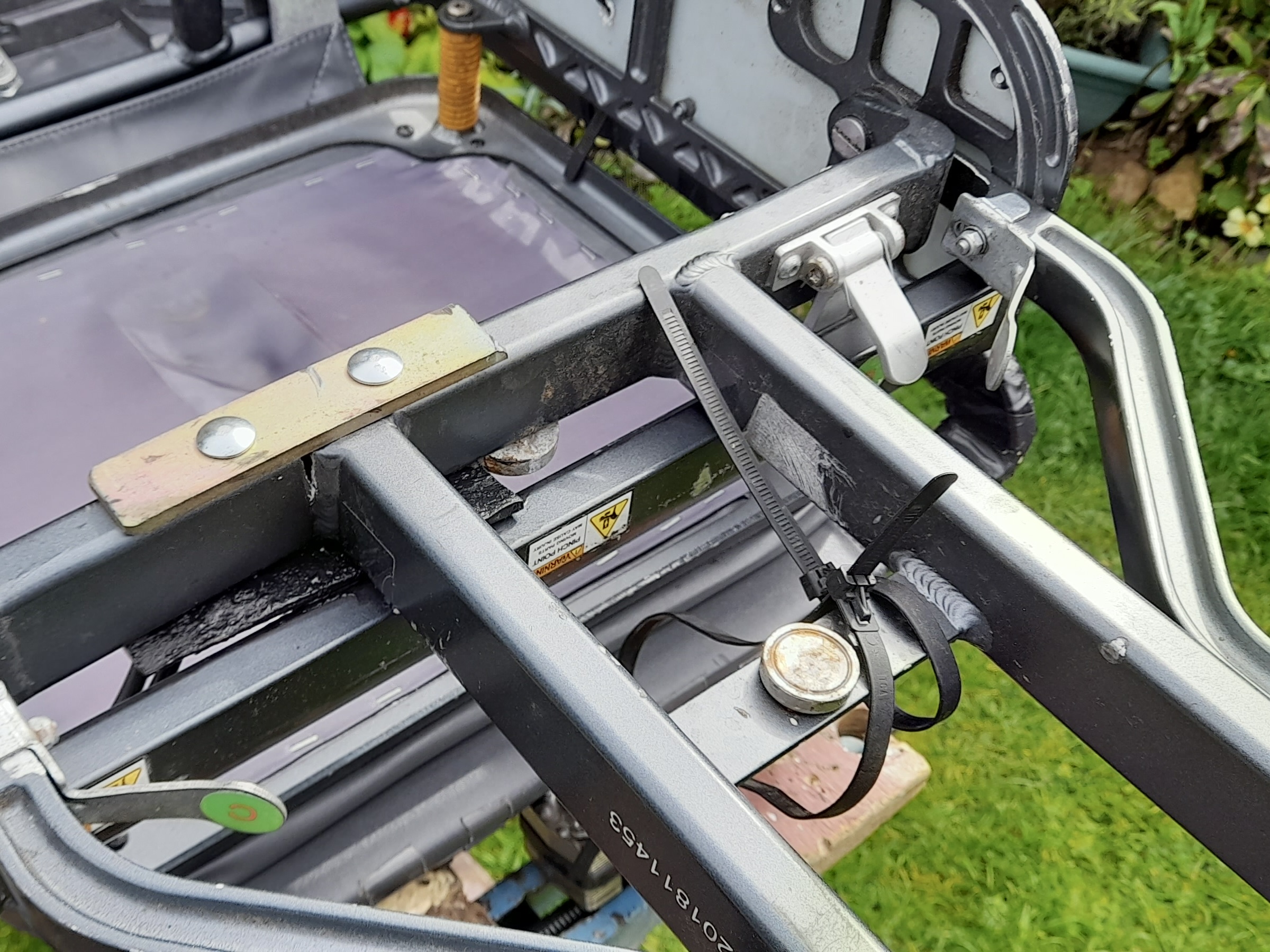 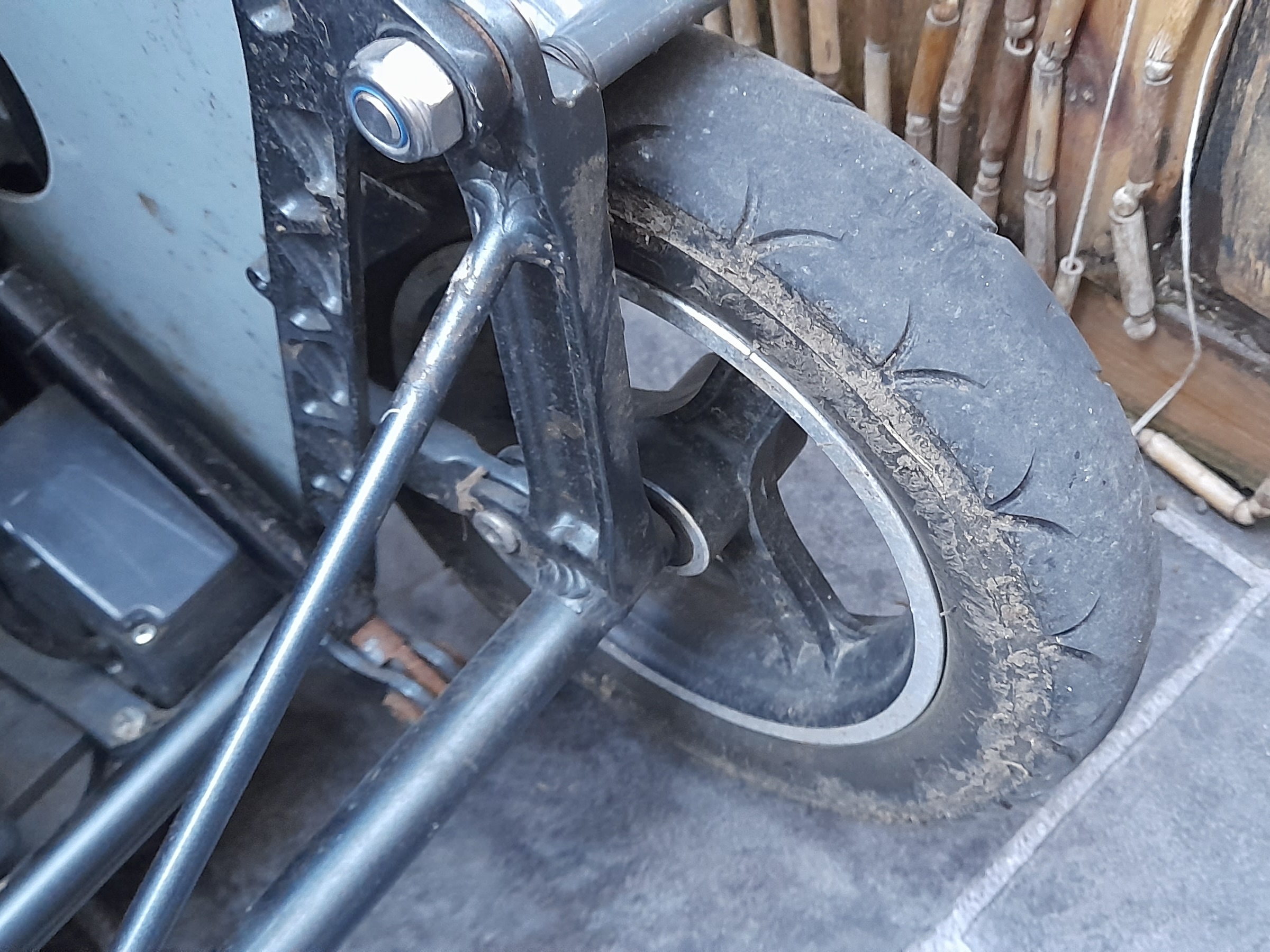 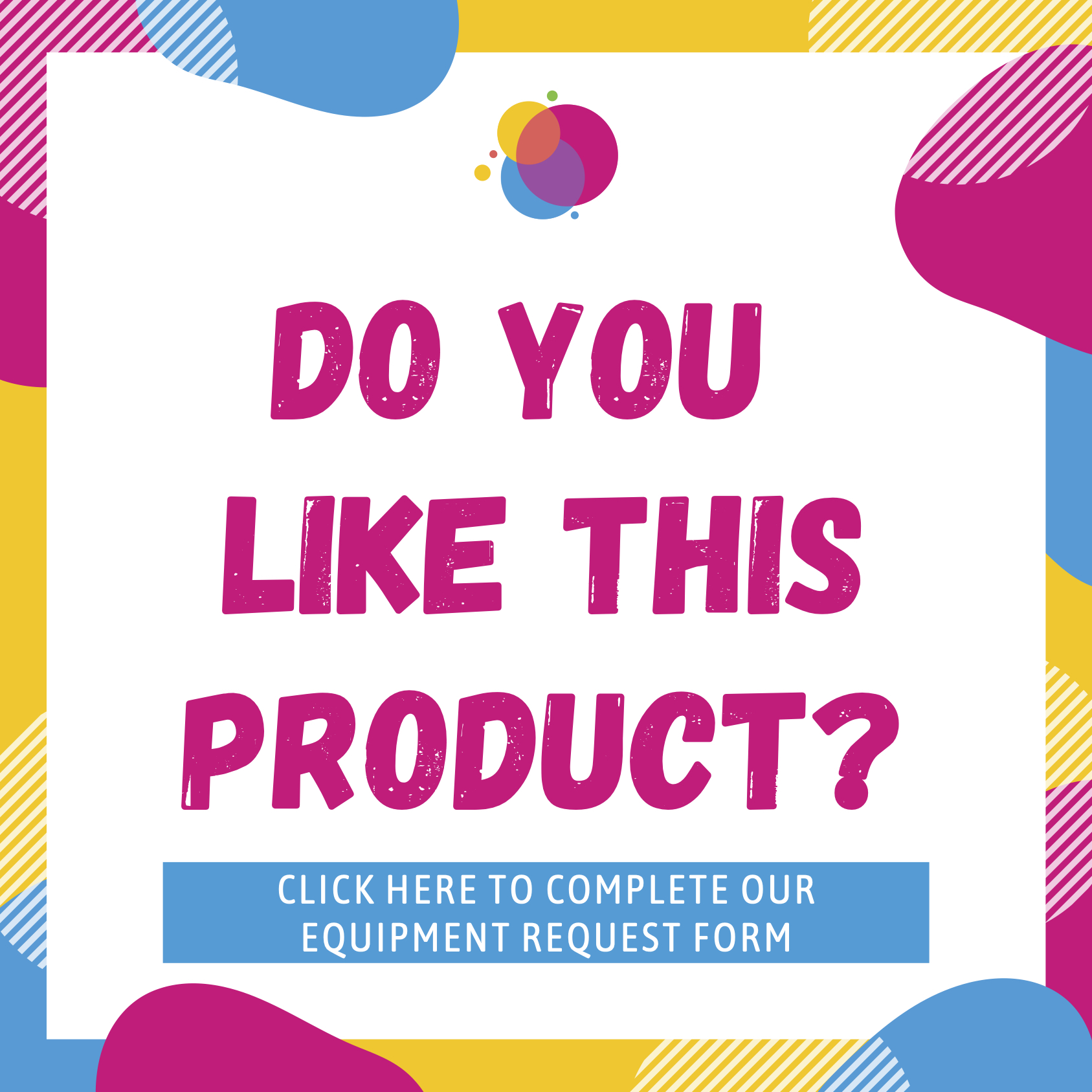 USERS RATING:
(Based on the users needs, lifestyle and preferences.)

Wheelchair Description:
A road-legal mobility scooter with 3 three wheels and a total weight of 17kg without the battery. Also has a folding frame, which can collapse down and unfold in seconds.

Source of Wheelchair:
eFOLDi In Redhill

Personal Opinion:
This is my eFOLDi with 1,000 miles clocked up. You might be asking how I know that it’s successfully travelled 1,000 miles, but I have a “Maps Ruler” app which tracks the route on the phone and total the miles up. I’ve also broken my eFOLDi review down into the following sections!

The Good Points:
1. Nice and light, easy to fold and can easily be transported in a small car boot.
2. Gets a lot of positive comments from people and encourages them to look in a good way as opposed to staring.
3. Tyres are good for 1,000 miles. Front tyres are only just about able to do that, see photos for example.
4. Solid/springy tyres would be a better option for active users.
5. Motor and rear wheel bearings have no problems after 1,000 miles.
6. Still using original brake blocks which have lots of rubber left on them. Only had to adjust here and there, which takes minutes to do.
7. Pulls a little trolley/trailer quite well even when full of beer and pop. (See picture).

The Bad Points & Problems:
1. A bit expensive at £2,195 (now even more), especially when compared to other folding scooters. Although I bought two, (one for me and one for the wife) so got a discount.
2. Not very good on hills, especially not the 1 in 6 as eFOLDi claims. Any steeper than a 1 in 10 the scooter struggles with. It’s even worse on a wet, slippery, or sandy surface.
3. Has a top speed of only 6mph, not the 8mph eFOLDi claims. Have even tried several speedometer apps and they all say the same thing. My wife is the same and we are both not exactly heavy people, so definitely bear in mind if you want to roll alongside a fit fast walker.
4. The range is also a lot less than the 14 miles eFOLDi claims. The best I’ve ever had is 10 and a half miles, which was on a nice warm day going across mostly flat surfaces.
5. A few nuts and bolts have fallen off on both of our scooters over time, especially where the handle attaches to the frame, but we were able to rectify this by putting superglue on the threads.
6. Both seats are very squeaky, which h we were also able to rectify by putting WD40 on the springs.
7. Display screen is almost useless on a sunny day. Would have been far better to have had an LCD display like an e-bike, showing speed, battery level, total miles, trip range etc.
8. My display screen also stopped working after the first charge as I left the battery in situ. Even though the ignition was off, and the keys weren’t in, my screen now shows 0.00v when turning on and running. Very peeved about it, but as it was my fault there is not much I can do.
9. Big issue here. My eFOLDi stopped folding correctly, and upon inspection, I discovered a crack in the frame (see picture). Have managed to bodge a repair using thick brackets and bolts, and only time will tell how long it lasts. Have been as careful as possible since purchasing, but you can’t avoid bumpy roads, uneven paths, cobbled streets, bad pavements, lack of drop kerbs etc.

The Design Flaws:
1. Both our scooters have sloppy steering columns (where the folding hinge is) from day one. A good inch and a half moves forward, backwards and side to side. Mine is considerably worse than my wife’s, but she only has done a couple of hundred miles, so is still like new just with the same issue. It would be far better with a heavy-duty clamp/hinge similar to folding bikes.
2. The pulling handle is not long enough, causing the rear wheels to hit the back of your ankles when walking. I eventually made a different handle that fits into the eFOLDi frame thus adding a foot (see picture).

All in all, a very good product that is a lifesaver for my legs. But would I buy another? Most likely, but only if I could find a second-hand/nearly new device because of the price

HOW COMFORTABLE IS THIS SCOOTER TO USE?

HOW EASY IS THIS SCOOTER TO TAKE APART?

HOW EASY IS THIS SCOOTER TO TRANSPORT?

HOW DOES THIS SCOOTER COPE OFF-ROAD?

(Based on an automatic calculation of the individual results above.)

How useful was this review? Be the first one !